This town is an important textile center in Odisha and is known throughout the world for its Sambalpuri tie-dye Ikat textiles. The surrounding landscape is full of lush valleys and forests, exclusive waterfalls, exquisite hills, and a distinct panoramic charm. Numerous tourists from around the world visit this town because of the exceptional and noteworthy Sambalpuri craftwork. With its charming vistas that will take your breath away, the tribal culture and traditions make it a jewel of Odisha. So here are some places to visit in Sambalpur especially for you.

Among the best places to visit in Sambalpur, Maa Samaleswari Temple is a notable landmark. The temple belongs to Shri Samaleswari Maa, she is the Regional goddess of the area and Also the temple has a huge history and stories famous in the whole Odisha. It’s wonderful to see Samaleswari Maa devotees get a chance to worship along the banks of the Mahanadi River. From very earlier times Samaleswari Maa has been famous by different names like Adishakti, Mahalaxmi, Mahasaraswati, and Jagat-Janani. 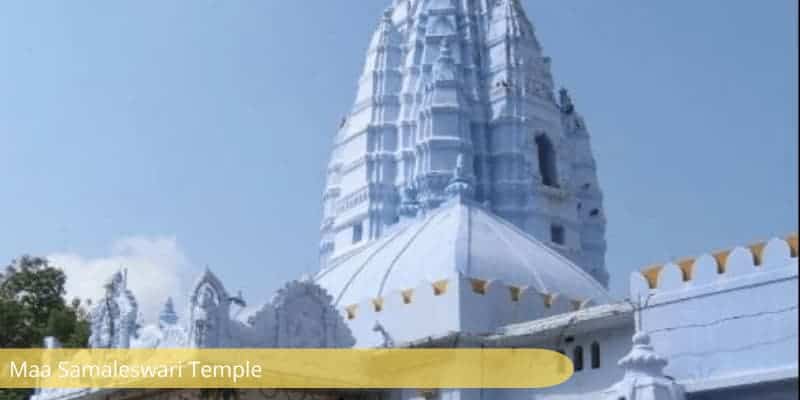 The place is nothing but a small Zoo among the places to visit in Sambalpur. It is a zoological park. Also you can find a small park for children to play around and to spend some fun time there. The zoo has 288 animals and about 20 species of birds. Not only this you can find many more attractions in the place. You can easily spend about 2-3 hours in this zoo while enjoying with your family or while spending some time with nature.

This temple belongs to Lord Shiva. You can find this beautiful temple at the peak of the hill and is popularly known as Budharaja. To go to the temple you have to climb the stairs all above. The hilltop temple is accessible by both car and foot. However, the walk to the temple is very exciting and enjoyable. You will get a chance to see many beautiful scenes along your way. The natural surroundings are very amazing, and the view of the city is magnificent. A very beautiful and calming park here you can spend your time alone and with family also. The park has paths to walk around also. You can find many people walking, running and doing exercise there. The park has a very calming environment which will help you detox your mental peace and relax your mind. If you want to spend some time in nature with yourself this is the best place that you can visit. Also for kids you can find different types of swings here.

The temple has many gods and goddesses like Navagraha, Hanuman, Annapurna, Bhairavi, Narasimha, Maa Durga, Vaishnavi Devi, Baraha, Maa Kamala and Maa Mangala. It is also famous as a Shakti Peetha. The people there narrate that on the occasion of Navratri mother appears in all her nine avatars. Also Maa Pataneswari fulfills all the desires and wishes of her devotees. Maa Pataneswari Temple is a very important and famous place among the places to visit in Sambalpur.

The best amusement park in Sambalpur is Sambalpur Music Park. You can easily spend about 4 hours of your trip there. Also you will have a chance to boat ride there. The entry fee for the park is Rs. 5 while the fee for boating is only Rs. 35 per person for a time of 20 minutes. As the name suggests you will also find a musical fountain there which is amazing to see. People visiting Sambalpur do not miss a chance to visit this amazing place.

This is a well-known location among Sambalpur’s tourist attractions. The presiding deity of this temple in Dadhibaman Avatar is Lord Jagannath. The main festival of this stunning temple is called Ratha Yatra. Thousands of followers visit this location annually to witness the festival. The location draws a large number of tourists and pilgrims due to its stunning panoramic views and this temple. The temple is a must-visit location because it is so well-known in the community. It is one of the best places to visit in Sambalpur and belongs to Lord Shiva devotees. The lake, fish, turtles, and view are all available for viewing while you pray in the temple. A large number of pilgrims from all over India visit this temple during the rainy season or the Shivratri festival. So if you want to see the crowd in the area then you must visit this beautiful temple in the month of February.

The zero point, Hirakud dam and Gandhi minar are places that are very close and can be visited collectively. Whenever you go to that side of the town you will find a place where you can see a minar that is Gandhi minar, a dam that is Hirakud dam and the place together is known as Zero point. The place is very famous due to the history of Hirakud dam. The place is on the Mahanadi river. People often sit on the bank of the river and spend some time. You can also witness the sunset and sunrise from the minar which is very beautiful and picture capturing.

Another popular attraction is the Science and Evolution Park, which the Sambalpur Municipal Corporation (SMC) built on two acres of land. Newton’s Third Law, Angular Momentum, Centrifugal Force, Mass and Inertia, , Projectile, Friction and Speed, Musical Tubes, Play with Mirrors, Gravity Ball, Planetary Motion, and DNA Model are just a few of the 86 or so devices and models that have been placed in the park. The Neanderthal Man, Archaeopteryx, Proconsul (Chimpanzee), Megaloceros (Giant Deer), Stegosaurus, Brachiosaurus, and Triceratops are just a few of the at least 31 models. Dinosaurs with motorized movement that are small and installed in the Evolution Park.

A very famous place to visit in Sambalpur. The planetarium has a hybrid technology, which combines optomechanical and digital views. Digital technology aids in the better projection of animated films while reducing the sharpness and resolution of celestial body images. Digital sky viewing does not have the same sense of awe as optomechanical sky viewing, which produces sharp focus. Here people but mainly students learn astronomy and has a capacity to accommodate about 142 visitors.

A beautiful place where people often come to see the sunset and sunrise. You can witness the sunset and sunrise over Mahanadi river which is very calming. The place has a history which you must listen to from the people who reside there. The dam was built by foreigners and the dam is still in good condition. This is the reason why many people come to visit this beautiful and picture capturing place. Like any other waterfall this waterfall also has immense beauty. One can experience natural beauty near this waterfall. There is lush greenery around the area and you will feel very happy and calm. You can spend time with your family, friends or alone. Also here you can go for tracking which is quite easy so there will be no problem going with family and kids. You can see the view of the nearby area from there. This waterfall is near the Zero point and Hirakud Dam.

The number of artificial reservoirs in Odisha comfortably outnumbers the number of natural lakes. These man-made lakes are an engineering marvel of Odisha, best exemplified by the magnificent Hirakud Dam. Hirakud shares the distinction of being the largest dam made entirely of earth and spans the Mahanadi River in the vicinity of Sambalpur, making it the longest dam in the world. It is also Asia’s largest man-made lake, and the only way to fully appreciate its size is to climb to the top of either the Gandhi Minar, which rotates, or the Nehru Minar, which is located at the opposite end of the dam.

This beautiful vatika is an amazing place among the places to visit in Sambalpur. The place has beautiful designs, statues and a small waterfall in the premises. You can sit anywhere and spend time. Also you can find many different types of flowers and trees there. If you are among nature lovers then you must visit this calming place.

So with this Vatika we end our list of 15 best places to visit in Sambalpur. The place is small but you have a lot to see there. Plan your vacation and go on a trip with your family to this amazing place. You will find everything here. From the natural beauty of waterfalls to the religious environment with the beautiful history of different temples. Don’t wait now, go and plan your trip!

15 Best Places to Visit in Kanyakumari

How to Enjoy your Own Company | 20 Tips that Really Works!

At some point of time we all feel that we want to be alone. Wanting some alone time is a

Weddings are life-changing and unforgettable. Gifts, well wishes, and memorable remarks are necessary for any wedding ceremony. Trying to figure